"This is God's good gift of sex. Let us enjoy."


Let me also remind you of the angels who held positions of supreme authority, which they gave up, abandoning their assigned domain; God now keeps them chained in darkness awaiting the judgement of the great day. Likewise, Sodom and Gomorrah and their neighboring towns serve as a warning to us - they received the punishment of eternal fire because of the sexual promiscuity and their pursuit of fleshly vice (literally: going after strange flesh).
In the same way, these deluded people defile their bodies, reject authority and malign the glorious angles.
Jude 6-8 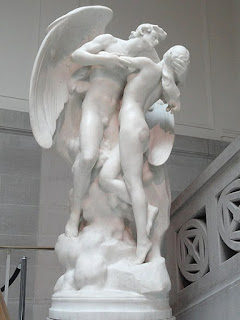 "The Sons of God Saw the Daughters of Men That They Were Fair," sculpture by Daniel Chester French

Jude has not been a friend to sexual and gender diverse people. A cursory reading of the twenty-five verses of this ancient letter leaves one with the feeling that flesh is be feared: sexual perversion being a certainty for arousing God's anger. Unfortunately, the cursory reading became the accepted understanding of the Letter of Jude.

However, the biblical scholar, L. William Countryman, has noted that the original hearers of this letter may have understood a very different warning. Countryman indicates that the Greek term "going after strange flesh" is not the typical designation for same-gender eroticism which is found in other Greek Scriptures and writings of the time. He takes this unique phrase as a key to understanding the text is referring to sex with angels.

While sexual relations between angels and mortals seem strange for contemporary ears, it is not a rare concern to the bible itself. Genesis 6:1-4 speaks of the "sons of God" taking the "daughters of men" for wives; referred to as the angles who abandoned their domains in verse 6 of our text. The other episode of such dallying is the story of Sodom and Gomorrah where the men of the city attempted to rape the angelic visitors; noted in verse 7 of our passage (see the  blog page Hosting a Rave in Sodom).

In the New Testament, the writer of the letter to the Hebrews states, "some have entertained angels unawares." More directly related to the issue here in Jude is 2 Peter's use of this same material: "This pertains especially to those who succumb to the desires of the flesh, and to those who rebel agains all authority. Those bold and willful people are not afraid to revile the glorious angels..." states Countryman. Not to mention the widespread understanding of the Greek gods having sexual liaisons with humans. What is there to learn from this ancient prohibition against sex with angels?

In the bible there is a consistent concern that sexual relations and sexual fulfillment be accomplished appropriately. Sex with angels is prohibited because it was understood as a way of controlling angels and, therefore, divine power. Sex with animals is not permitted because the animal cannot consent to the relationship. Forced sex and rape are outlawed because it proves life-denying.