(Jesus) added, “A man had two sons. The younger of them said to their father, ‘Give me the share of the estate that is coming to me.’ So the father divided up the property between them. Some days later, the younger son gathered up his belongings and went off to a distant land…
Luke 15:11-13 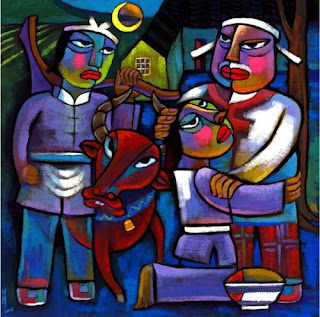 Thus begins the beloved parable of the prodigal son. This parable unfolds family relationships in the midst of loss, pain, forgiveness, and restoration. We flinch at the damage of arrogance, cry at the humble moment the prodigal "comes to his senses," take joy in the reconciliation experienced and ponder the older brother's jealousy. This parable is a favorite because we identify with its sadness and rejoice in its hope.

Phyllis Tribble coined the term "texts of terror" to identify those scriptures used as a warrant to treat women as objects of lesser value than men. Queers also deal with well-known texts of terror: Sodom and Gomorrah, the Holiness Code of Leviticus, Paul's reasoning in the opening of the Letter to the Romans. This beloved parable of the prodigal, with all its beauty and sensitivity, is for me a text of terror.

When I came out, my family dutifully placed me in the role of the prodigal. Unfortunately, I accepted the roll equating my homosexuality with the foreign land of the parable. A land unknown and feared by my parents, my brother, my sisters. I also assumed that the issue of distance and familial strain lay within me, as the parable illustrates for the prodigal.

The worse damage of this text was the false hope it gave my family. As good conforming christians they patiently waited, and fervently prayed, for the day I would "come to my senses." The irony is that it was coming to my senses which caused them to cast me as the prodigal, to begin with.

To be sure the mapping of the parable upon my life was only partial at best. Owning my homosexuality did not put me among foreigners as a second class alien. Instead, I began to find my home, and figure out I was not alien after all. Far from longing for the land of heterosexual conformity, I became grateful for a wholeness that had eluded me. Still, with great piety, my family assumed the role of the wounded father who loved the sinner but hated the sin. This sacred text caused me great pain until I realized it had been wrongly applied.

Queer persons are not and cannot be the prodigal. We have not left home instead we have found home. If we are to appropriately map this parable, we must understand that our role is that of the parent. We are the ones who patiently wait, scanning the road from time to time for a hint that our families have come to themselves and are returning from the foreign land of intolerance. This text models for us the forgiveness we can give: forgiveness given not in the paternal "if you had listened to me" way, but forgiveness given out of the sheer joy that comes with authentic reconciliation.