"Console my people, give them comfort," says your God. "Speak tenderly to Jerusalem's heart and tell it that its time of service is ended, that its iniquity is atoned for, that it has received from Adonai's hand double punishment for all its sins." 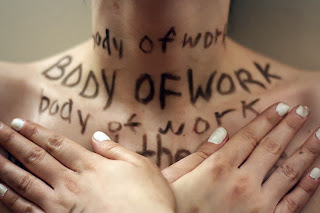 From "Body of Work" by Gili Estlin Hirsch and Alex Ogden

As one born and raised in the christian tradition these words are very familiar this time of the year. The passage is paralleled with the advent of the Christ as a way of emphasizing the new thing God is doing. For me the essence of my faith is the ready reception of newness as given by the presence of Jesus. This passage has brought me much comfort as to the role of God in the unfolding of history.

Yet, as a gay person this very same text which once brought me comfort now leaves me a bit weary. As one who stands among a community that has been proclaimed sinful I take umbrage of the notion that Jerusalem has received "double punishment for all its sins." Historically, we are observing the destruction of Jerusalem by the Babylonians and the seventy years it laid waste until its reconstruction. Metaphorically, I'm afraid we are speaking of a God who acts more like a jealous husband bent on "training" his wife than a loving parent nurturing her children.  Or at least that's how "sexual sinners" have been treated at the hands of those who supposedly speak on behalf of the Divine.

For our detractors its easy to map this passage onto sin and sexual "perversion." But a resistant reading is present.  We who self identify as les-bi-gay-trans-queer-intersex-asexual should hear the emphasis of these verses on healing. "Console," "comfort," "speak tenderly" are the opening verbs not "condemn" or "attack" which is the action ususally directed toward us.

As the continuing story of the returning exiles remind us, there is still much work ahead. There will be moments of triumph and setbacks, moments of great joy and utter failure. It  is a reminder to which the photo by Ogden points - that our lives and our liberation are a body of work. Some complete and some working toward completion. However, the new thing is already in our midst and in our lives as the promise of comfort comes to fruition.
Posted by David K. Popham at 9:07 AM