We had, as you know, been given rough treatment at Phillipi, and it was under God who gave us the courage to proclaim the Good News to you in the face of stiff opposition. We don’t preach because of impure motives or deceit or any sort of trickery; rather it was God who decided that we are fit to be entrusted with the Good News, and when we are speaking, we’re trying to please not mortals, but God, who can read our inmost thoughts.
1 Thessalonians 2:2-4


﻿
Paul and his crew were under pressure. They had a joy to share wrapped in a message of love and understanding. Others apparently had another message, a deceitful and dodgy one. Here’s the problem, which do we heed? If both are presented with the same sincerity and concern what stops me from choosing the dodgy over the fit?

No doubt that from time to time I have chosen the dodgy message. No doubt I chose those messages as they were enfolded in ideas and notions that I found attractive. No doubt I paid a price for my choices.

For young queer persons in whom the tool of discernment is yet to be refined and for whom pressures can be overwhelming the choice is even tougher. After all, messages are coming from family, friends, school, and faith communities. The packages are all polished and well known to us.

Paul adds an insightful criterion for discernment – motives. As I reflect on my own parents’ anxiety over sexual expression I know their motives were clouded by a fear of upsetting God, as well as a fear of embarrassment. The first I can understand as my father was a minister and his religious outlook colored all decisions of the family.

I also know the other side of this issue. I have encountered, as Paul did, those who hold that I am the purveyor of deceit and trickery. My message is incompetent, and I am a fraud since a queer minister is repugnant. There is not much of a reply one can give to such charges. All that can be said by me and the many other queer ministers who serve the Sacred faithfully is that “it was God who decided that we are fit to be entrusted.”

Again God proves that the channel of transforming love is rarely the places of power and respect. Rather these channels are the struggles of the marginalized and the broken. Here from the margins, as Paul was on the margin, the Sacred entrusts the good news to those who polite society overlooks.
﻿

Come and bless Adonai,
all you who serve Our God,
ministering by night in God’s house!
Lift up your hands in the sanctuary,
and bless Adonai!
May you be blessed from Zion
by the One who made heaven and earth!
Psalm 134

﻿
﻿During Pride month I ponder the place of queer people in the congregation of God worshipers. In the face of traditional and ongoing discrimination by religious bodies I can scarcely believe that this invitation to come and bless and to be blessed is for me. If I come will the door be open? If I bless will hearts be receptive? As one who is among those cast out and silenced, how shall I respond to this invitation?

There is an intrinsic fear among the various spiritual expressions toward queer folk. It is the fear that trans-les-bi-gay-intersex-asexuals and allies transgress the purity of the congregation. We who seek out forbidden pleasure are polluted by our sexual "proclivities." Our impure presence reflects upon others casting our “shame” beyond ourselves and onto all we associate with. As those in ancient times, we are made to feel that we should shout “Unclean! Unclean!” in order to give time for heterosexuals to flee unscathed.

People like us are rarely granted entrance to the assembly of the Sacred. Our presence may contaminate and make profane that which is holy. Often we find the door to the divine barred.

Outlawed, this invitation to come and bless is strange. It is for me an invitation to come with all my taboo desires in order that I might authentically participate in the life of the Spirit. If I am to genuinely bless God then I must enter sacred space with Pride. I must bring with me the fullness of what I am so that I might be fully present to the Holy.

Queer people do not bless God by denying the rich and varied sexual expressions we are drawn too. We celebrate God by taking joy in our eroticism before the Holy. Like the barren couple now blessed with child, we offer our sexuality to the Sacred as a proud benediction upon the One who is the source and sustainer of life.

By celebreting our expressions of love and pleasure in the sacred place of God’s dwelling we enjoy the days which come from the Hand of Life. In receiving this gift we find ourselves blessed by the Maker of heaven and earth, who celebrates our Pride.
Posted by David K. Popham at 7:37 AM No comments:

Amaziah the priest of Bethel then sent this message to Jeroboam ruler of Israel: “Amos is plotting against you in the midst of the House of Israel. The country can no longer tolerate what he keeps saying. For this is what he says, ‘Jeroboam will die by the sword, and Israel is going into exile from its land.’”
Amaziah told Amos, “Go away, seer! Go back to the land of Judah. Earn your bread there. Do your prophesying there. We want no more prophesying in Bethel. This is the royal sanctuary, the national Temple!”
Amos 7:10-12

The clashing of authority with free thinkers is as old as religious expression. Here we come across the prophet Amos being reproved by Amaziah the high priest of the royal chapel at Bethel.

Amaziah wants Amos to go away and to take with him his obstinate witness against the king and nobles of Israel. Apparently Amos is oppressing the power structure with his dreary call for justice.

Amos’ reply to Amaziah is incredibly subversive. The complaint is that Amos has flaunted or peacocked his alternative prophetic views at the center of propriety – the king’s chapel. Amos simply replies that he is not a prophet, nor the son of a prophet (the product of a prophetic school), but rather a simple tree dresser.

All who are proper may be scandalized and shocked at our casual “flaunting.” But like Amaziah their issue is really with God. We, like Amos, have simply responded to the impulse God placed in us at the time we were knitted together in our mother’s womb.

The clash between societal approval and the spirit’s freedom can be long and difficult. Wounds and scars will result. Like Amos, when we respond to what is given by the Sacred, we are put into conflict with that which is blasphemous no matter the propriety it is wrapped in.
Posted by David K. Popham at 7:42 AM No comments:

I’m glad to announce to you, sisters and brothers, that what has happened to me has actually served to advance the Good News. Consequently it has become clear throughout the Praetorium and everywhere else that I am in chains for Christ. Because of my chains, most of our sisters and brothers in Christ have been encouraged to speak the word of God more fearlessly.
It’s true that some preach Christ out of envy and rivalry, but others do so with the right intention. These latter act out of love, aware that I am here in the defense of the Good News. The others, who proclaim Christ for selfish or jealous motives, don’t care if they make my chains heavier to bear.
All that matters is that in any and every way, whether from specious or genuine motives, Christ is being proclaimed!
Philippians 1:12-14 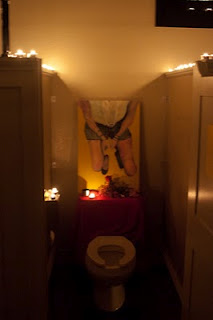 Paul writes from jail. His crime? Being born a christian, or at least being born again a christian. Paul was jailed because he lived out of his center. Being true to his own self-identity Paul couldn’t help but feel and live as he did. Born again in Christ, it was not a choice but a compelling inner compass that led Paul into a life contrary to national laws and natural schemes (resurrections are not a part of the natural order of things). Paul paid the price – imprisonment and ultimately death.

Paul considered his jail time an honor as it resulted in the love of God being spread even more vigorously than before. It did not matter if people were speaking maliciously and malevolently. What mattered was that a way into the heart of the Sacred was being articulated and shared with those who were unaware.

We call Paul and others like him martyrs as they paid the ultimate price in giving their lives for their beliefs. Martyrs are esteemed by all expressions of faith for their blood cemented the various paths into the heart of the Sacred. As a person of faith I join the ranks of those giving homage to martyrs.

Lately, there has been a rash of traditionalist voices calling for queer martyrs as if by breaking our wrists, ghettoizing us in concentration camps, or calling on the government to send death squads after us that which is innate can be stomped out. These voices seemed to be raised in ignorance that martyrdom is already well known in the queer community. We are well acquainted with persons who defended queer affections and paid the ultimate price. People despised for who they shared love with, yet who sought fulfillment in the midst of discrimination.

It is these lives with their mixture of despair and courage that helps me to keep going. If I can be openly queer and still find employment as a minister it is due to those who pushed ahead in the days of deep prejudice. “Their crosses on the road help me go another mile,” to quote the Indigo Girls.

Queer martyrs are typically heralded only in small circles and groups of friends left behind. I give homage to those who gave love, soul, and life as a result of being true to their internal compass.
﻿
Posted by David K. Popham at 4:35 PM No comments: