The Sacred Imprint of Sexual and Gender Diversity (Matthew 22:15-22)

Then the Pharisees went and plotted how to trap (Jesus) by what He said. They sent their disciples to Him, with the Herodians. "Teacher," they said, "we know that You are truthful and teach truthfully the way of God. You defer to no one, for You don't show partiality. Tell us, therefore, what You think. Is it lawful to pay taxes to Caesar or not?"
But perceiving their malice, Jesus said, "Why are you testing Me, hypocrites? Show Me the coin used for the tax." So they brought Him a denarius. "Whose image and inscription is this?" He asked them.
"Caesar's," they said to Him.
Then He said to them, "Therefore give back to Caesar the things that are Caesar's, and to God the things that are God's." When they heard this, they were amazed. So they left Him and went away. 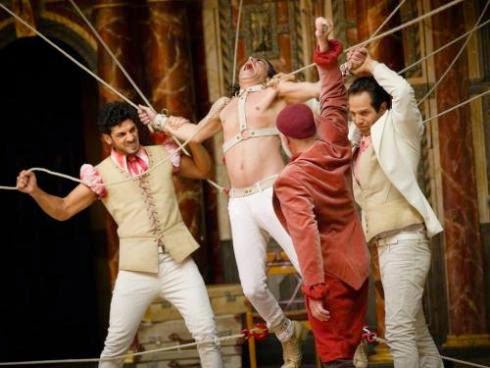 Scene from Habima's Merchant of Venice

Our queer ears perk up when we hear that religious and political leaders (the Pharisees and the Herodians) were seeking to trap Jesus. We are rather familiar with religio-political traps. The plight of sexual and gender minorities in contemporary Africa is festooned with such traps. The history of other societies are not any better. When we hear these words we need to understand that Jesus is being targeted just as we are often targeted.

The ruse of entrapment is a question about taxes. This question is not neutral or an invitation to a general conversation of the role of government in the life of its citizenry. No, this question is laden with the deepest repugnance of Judea. For it is not a question about taxes. Rather, it is a question about corroborating with the occupying forces of a foreign government. Occupation is the brutal attitude still inherited from colonialism. It means we come in and impose on you our will. LGBTQIA folk have been "occupied" for countless centuries as we are the objects of the imposition of the wills of Caesar and the Church (as well as synagogues, mosque, and other religious expressions).

Jesus asks for a coin and returns the question put to him by asking a question of those gathered. "Whose image is this." When a person of the Jewish faith begins to talk about images we know that this is not a simple question about portraiture and likeness. Israel has been enjoined by God to never make a likeness of the divinity for fear the likeness will be worshiped in place of the true God. So it is then that Jesus seems to tip his hand. "Give to Caesar what is Caesar."

Then Jesus presses on, "… and give to God the things that are God." This is the part of the answer which leave us amazed. While the coin in imprinted with the image of Caesar, according to Genesis 1:26-31 our lives are imprinted with the image of God. By contrasting the two, Jesus draws our attention to what Caesar demands of us and what God provides for us. Where Caesar demands a pound of flesh, God provides love. Where Caesar demeans and institutionalizes discrimination, God provides dignity and value. Where Caesar seeks to rob us to further his gain, God sustains us to further our gain.

Queer folk dance with a nasty and ugly Caesar. The collaboration between religion and politics in our time to delay equality, to deny dignity to our loving, to question our humanity in the light of our sexual expressions continues to buttress the attitude of occupation of our loving and our living. Jesus calls us to ignore Caesar and remember who imprinted us to begin with. An imprint that bears in us the mark of sexual and gender diversity.

So it is with queer spirituality, any encounter with God is first and foremost an encounter with Self-love that leads us into honoring and calling as worthy all which we were told to fear and even loath about ourselves.

Meanwhile, Moses was shepherding the flock of his father-in-law Jethro, the priest of Midian. He led the flock to the far side of the wilderness and came to Horeb, the mountain of God. Then the Angel of the Lord appeared to him in a flame of fire within a bush. As Moses looked he saw that the bush was on fire but was not consumed. So Moses thought: I must go over and look at this remarkable sight. Why isn't the bush burning up?
When the Lord saw that he had gone over to look, God called out to him from the bush, "Moses, Moses!"
"Here I am," he answered.
"Do not come closer," (God) said. "Remove the sandals from your feet, for the place where you are standing is holy ground." Then (God) continued, "I am the God of your father, the God of Abraham, the God of Isaac, and the God of Jacob." Moses hid his face because he was afraid to look at God. 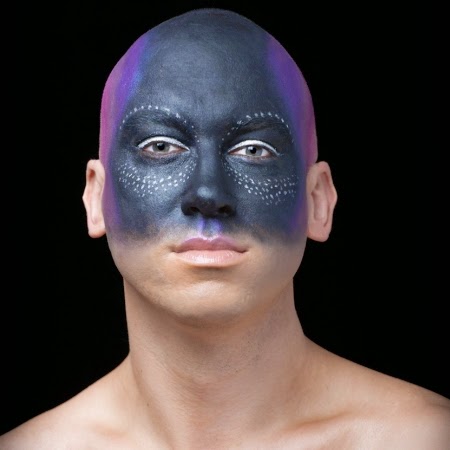 Gazing at the picture of Nick Field I am brought into some mystery. His hidden face both reveals and conceals who he is. He's a performer, possibly gay given the context of the website I originally found the picture on, other than the fact that he happens to be Caucasian and bald there is little else I know about him. All else is hidden. Is he content with his life? What brings him joy? What makes him sad? How heavy are his anxieties? These are hidden away. To be honest a picture of Nick without his mask would tell me no more than the one above. I would need to enter into a friendship with Nick to understand what makes him tick.

The call of Moses follows a similar path. Upon encountering the Sacred, Moses wants to hide his face. Through a series of exchanges which follow this passage, the Holy in Moses seeks to motivate him toward the task of liberation. At each turn Moses demurs pointing out a fault within himself that prevents him from acting on these inklings and prodding of the Spirit. An entire people wait in slavery to be liberated but Moses is busy hiding his face.

The temptation to blur our faces when times are tough and ornery is strong. Concerns over being rejected and over personal safety cause us to pause. One does not exit the closet without calculating the risks. Although attitudes are changing, people still treat us differently when they become aware of our place in sexual or gender diversity. Certain religious voices still teach that how God treats queers is very different from how God treats straight people. So it is natural that we might hide our faces, blurring them, as on some amateur video, so our true identity is concealed.

It seems that the Sacred will have none of this. One way of understanding the symbolism of Moses removing his sandals is so he might be grounded in his own holiness. A holiness not created by Moses, but rather of which he partakes as he enters into all that is sacred - even sacred about himself. The call of Moses is a call to Self-love, to honor and see as worthy that which he has feared and loathed about himself. So it is with queer spirituality, any encounter with God is first and foremost an encounter with Self-love that leads us into honoring and calling as worthy all which we were told to fear and even loath about ourselves.

There is a strain of spirituality that indicates that to know God is to know ourselves for there is no exploration of the Sacred outside an exploration of ourselves. For many a queer person that exploration has been denied us due to our sexual and gender diversity. The story of Moses is an invitation to move beyond the voices of this world and to listen to the voice of the Heart.