Beloved of the Lover, who equips us to flourish, accept the offering of our queer living and loving.

But honor the Messiah as Lord in your hearts. Always be ready to give a defense to anyone who asks you for a reason for the hope that is in you. 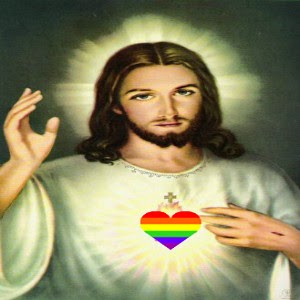 What are the contours - the images, vocabulary, and metaphors - of the God who is queer affirming? How do queer people of faith "give reason for the hope" that is in us? What are the attributes of the God we worship?

Gloria (praise for what God and Christ bring into our lives)
Glory to you, our God the source of life who is above, below, around, within.
May the earth be filled with your joy and acceptance of all people.
We praise your beauty. We glorify your creativity.
We give you thanks for your great passion;
Heart of the universe, source of life, the ribald God.
And to the lover of our souls, the beloved of God, Jesus our Christ.

Jesus our friend, wounded companion, joy of our hearts desiring:
You who enable our lives to flourish, inspire us.
You who empower our souls to shimmer as rainbows, hear us.
You who are intimate with the source of life, energize our own yearning.
For you are primal desire. You are the lover of our souls.

And we give the purpose of our living and loving to the lover of our souls, Jesus our Christ, joy of our desiring, beloved of the lover.
Born of the source of life as primal desire, beloved and lover, desire of desiring, true passion from true passion,
Erotic expression, not lustfulness, of one with the source of life.
Through Jesus all desire - longing and belonging - emerge and merge.
Who for our flourishing did take up creaturely life.
Enfleshed by the Holy Spirit of the socially subversive Mary:
And was made an embodied, gendered, sexual being.
You, our Christ, suffered hate and rejection:
Your body, like many of your queer brothers and sisters, was beaten and tortured.
You died and was buried.
On the third day you flourished anew by the consummation of God's searching heart.
Passion found desire and you, the beloved, was reunited with God, the lover.
You lure creation with your longing for us, so that our living and loving may also flourish.
Your kin-ship knows no bounds.

And we give the purpose of our living and loving to the safe places and supportive communities
Where your desire for creation, O God, envelops us.
We confess one source of passion for the flourishing of life,
Even as we await the fullness of inclusion and life in a world honoring all expressions of love.
Amen.

Benedictus (praising of Jesus' actions)
Blest is Jesus,
Who expresses inclusive love.
Hosanna in the highest.

After the Sabbath, at dawn on the first day of the week, Mary Magdalene and the other Mary went to look at the tomb.
There was a violent earthquake, for an angel of the Lord came down from heaven and, going to the tomb, rolled back the stone and sat on it. His appearance was like lightning, and his clothes were white as snow. The guards were so afraid of him that they shook and became like dead men.
The angel said to the women, "Do not be afraid, for I know that you are looking for Jesus who was crucified. He is not here; he has risen, just as he said. Come and see the place where he lay. Then go quickly and tell his disciples; 'He has risen from the dead and is going ahead of you into Galilee. There you will see him.' Now I have told you."
So the women hurried away from the tomb, afraid yet filled with joy, and ran to tell his disciples. Suddenly Jesus met them. "Greetings," he said. They came to him, clasped his feet and worshiped him. Then Jesus said to them, "Do not be afraid. Go and tell my brothers to go to Galilee; there they will see me. 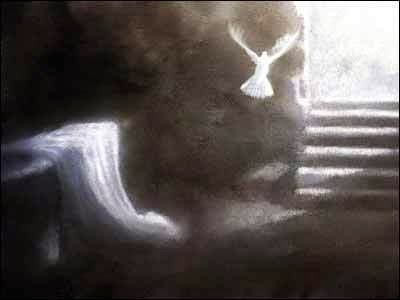 A number of sexual and gender queer folk have lived with the consequences of the closet for too long. All kinds of terrible psychological, emotional, and spiritual things transpire in the tomb of heteronormativity. For those who self-identify as a sexual or gender minority fear, guilt, shame, and self-loathing can hold us back and keep us tightly sealed in the tomb of society's expectation. "Coming out, for most of us, is like an exorcism that releases us of the darkness we have lived in for years and caused us to believe awful things about ourselves. On the other side of the looking glass are freedom, light and life" (Anthony Venn-Brown, A Life of Unlearning - a journey to find the truth).

Jesus emerging from the tomb gives us a glimpse of our own emergence. When Jesus is raised we refer to him as the Christ more so than in his life: a sign that the one who comes from the tomb is more fully himself. So it is, when queer folk emerge from the closet we become more fully who we have been all along.

The story of Jesus can be read as a story of exploring self-identity and ultimately embracing the destiny wrapped in one's identity. For queer folks, this destiny includes the closet and coming out. Veen-Brown follows this thought, "Every single courageous act of coming out chips away at the curse of homophobia. Most importantly it's destroyed within yourself, and that act creates the potential for its destruction where it exists in friends, family and society." The double encounter by the women - first the angel, then Jesus - with the message to tell the disciples to go to Galilee underscores the tension between who we have been and who are becoming.

Resurrection also alerts us to the role of love in the coming out process. Technically speaking, Jesus did not "rise" from the tomb. In spite of the translations above, the Greek is always passive, Jesus "was raised" from the tomb. In the christian tradition the act of raising is connected to the love of God. In the story of Jesus, resurrection is the affirmation of the identity of Christ as the beloved of God, even when the world was saying Jesus was cursed of God. To claim and act on such love often leaves others fearful for they do not know what to do with the unabashed power of unfettered passion.

Turning to Veen-Brown one more time: "The (same gender) love you are experiencing encourages you to face the reality that this is who you really are and also has the power to set you free. The richness, beauty and depths of love can only be fully experienced in a climate of complete openness, honesty and vulnerability. Love, the most powerful of human emotions, is calling you to freedom and wholeness."

I disagree with Veen-Brown in that love is more than a powerful human emotion. From a spiritual perspective, love is the very structure of creation, underlying the primal emergence of life - life from the tomb, life from the closet - to the promised freedom and wholeness of God's kin-dom.

In the resurrection, queer people take hope that the grave of heteronormativity is not the final destination wrapped up in our identity. The story of the resurrection helps us to claim our own journey set by the label of "faggot." We can say with certitude: On that day, when we came out of the closet with Christ, and fought the war of heteronormative expectations,  our "death" to these expectations gave way to our victory of experiencing healing and acceptance, and knowing we too are beloved.

Alleluia! We have been raised with Christ.
Posted by David K. Popham at 6:51 AM 2 comments:

This post is a rare repeat. It first appeared at Easter 2012. However, I felt the need to repost following two events of this week. One has been Kittredge Cherry (Jesus In Love Blog) and Douglas Blanchard (Facebook) enduring much rancorous criticism over their book The Passion of Christ: A Gay Vision. The second being the two states which voted to legalize prejudice against LGBTQIA folk in the name of "religious freedom." These events - occurring simultaneously during Holy Week - reminded me that people of sexual differentiation are indeed still being nailed to crosses of hate.

When noon came, darkness fell on the whole countryside and lasted until about three in the afternoon. At three, Jesus cried out in a loud voice, "'Eloi, eloi, lamasabachthani!'" which means, “My God, My God, why have you forsaken me?” A few bystanders who heard it remarked, “Listen! He is calling on Elijah!” Someone ran and soaked a sponge in sour wine and stuck it on a reed to make Jesus drink, saying, “Let’s see if Elijah comes to take him down.”
Then Jesus uttered a loud cry and breathed his last. At that moment the curtain in the sanctuary was torn in two from top to bottom. The centurion who stood guard over Jesus, seeing how he died, declared, “Clearly, this was God’s Own!”
Mark 15:33-39 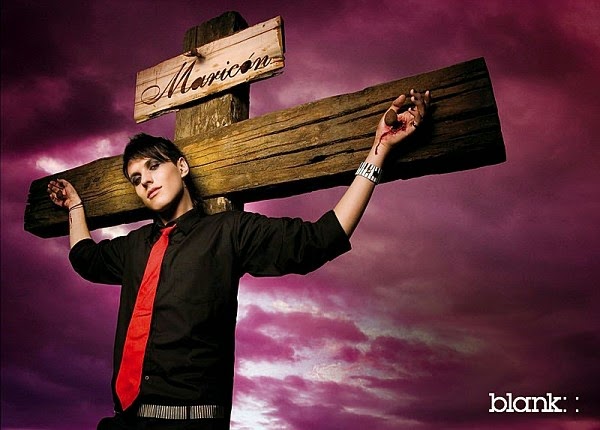 Jesus died a queer’s death. Hate, ridicule, scorn, anger, humiliation, beatings – there is very little difference between these dynamics in the death of Jesus and in the lives and death of countless queer persons.

As a minister I am accustomed to speaking of a “peaceful death” or a “troubled passing.” With Jesus, and others who died as objects of abuse, we must use the term “victim.” Here the death of Jesus intersects with the queer community.

There’s a simple truth among queers – we are often at the mercy of heterosexual supremacy. Disempowered and marginalized we are the victims of an attitude and cultural posture which sees us as expendable. The Romans said of Jesus, “What’s one less Jew in the world?” Heteroarchy says of us “What’s one less fag in the world?”

I am not Jesus. It deeply hurts when I am belittled because I am gay. My own sense of desperation and wounded esteem arise to repay hurt with hurt. I am ready to fight and deliver punishment with all the ferocity I can muster. Forgiveness is not on my radar.

As a queer person of faith I wrestle with the invitation to repay evil with good. It is hard to forgive when society persist in condemning me. So, at the foot of the cross I wrestle…
Posted by David K. Popham at 8:32 PM No comments: