"Under no circumstance should the innocent sight of two men kissing in public be the trigger of so much hate and ill will."

For all have sinned and fall short of the glory of God. 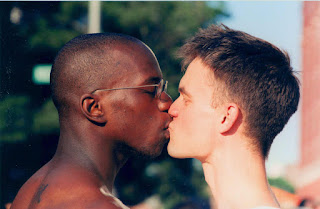 Sin is not a subject I spend much time writing about on this blog. Largely because it is a much misunderstood biblical concept. On the one extreme are those who see the fires of hell when this issues is spoken about. On the other extreme are those who cry out "sin like you mean it!" Those that see the act of breaking one taboo or another as a protest against the marginalization and disenfranchisement the taboo speaks too.

One of the problems of the concept of sin is who gets to define what sin is. Typically it is those in power and they define sin in such as way as to buttress their hold on power. Take for instance the "sin" of homosexuality. Clearly queerness is defined as a sin to buttress the power base of the heteronormative. Under no circumstance should the innocent sight of two men kissing in public be the trigger of so much hate and ill will. Yet it was, because a whole swath of conservative religious voices has declared it to be "sin!"

Interestingly what I found to be sinful was the number of these conservative voices calling for vigils and prayers for the victims of the shooting. As I rather nastily said to a Southern Baptist minister acquaintance, "If you can't honor us in life, keep your bullshit out of our funerals." Still he could not see the disconnect of preaching against homosexuality on Sunday and praying for our dead brothers and sisters on Monday.

Personally, I do have a rather strong understanding of the manifestation of sin. Let me start with the insight of postmodern thinkers: we humans cannot transcend ourselves. We are enmeshed in our very creatureliness and cannot be something other. The bible enlarges this insight to denote that deep within the self is the will to dominate in order that I may survive. This dynamic is so great that just to be born is to participate in the will to dominate. We "do" in order to justify our existence.

In the case of the Pulse Nightclub the "doing" was to seek to eradicate the sinner. Which demonstrates the final biblical insight into sin, that even when we think we are seeking God, we actually act out of self-preservation and seek to be God.

It is not my intention to be cliched and say the shooter was a sinner and if he had just been right with God, Orlando would never have happened. It is my intention to say that due to the sin of intolerance to the LGBTQIA community an attitude was birthed by which the shooter could justify his actions in the name of religion. The same sinful attitude allowed conservative religious folk, who speak against and joke at queer people, to see themselves as unstained by this incident. Although the blood of our queer martyrs flows across their hands as sure as if they pulled the trigger themselves.

My acquaintance has not replied, although he was the one who invited the conversation.  I'm not surprise for hypocrisy often stumbles when the facade of self-delusion is pulled away.

As a religious person I am not stumped by sin. Good religions are those that indicate a way from the trap of self-delusion and the will to dominate. However, as a religious person I'm also very much aware that we all need to adopt a posture of confession, knowing that even at our best the drive to dominate will manifest itself: that what I think I'm doing for good, only turns out to be a delusional excuse for self-preservation and self-promotion.

May Eternity have mercy on our souls.
Posted by David K. Popham at 4:01 PM No comments:

I am sorry, but one cannot pray for Orlando if one speaks against homosexuality, seeks to pray the gay away, refers someone to aversion therapy, opposes marriage equality, or otherwise uses one's office as a minster or civic leader to disparage the "gay lifestyle." 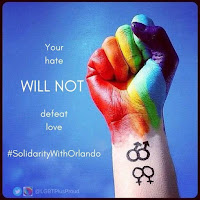 It's been ten months since my last post. Taking a break as I've felt I've not had much to say. But the acts of a hate terrorist in the Pulse Nightclub has caused my voice to awaken. I have so many feelings watching the news and then the reactions to the event. If you happen to be a Face Book friend with me, you have seen my posts throughout this day. What I write here restates and explores what was posted there.

Strangely, I find myself not angry at the perpetrator of the horror. I thought I would be. I thought once a name was given and an inevitable picture of the shooter appeared I would burn with a deep brooding anger. The kind that smolders until touched by oxygen and then explodes. But that did not happen. Instead when I met the hater I could only feel pity for him.

His name is Omar Mateen. My pity goes out because he is a product of heterosexist attitudes that continue to understand queer lives as "less then" and "less worthy." In reality he goes by many names, Susan, Mark, Shara, Donald. He inhabits many expressions of faith including Islam, Christian, and Jewish. He is average and nothing sets him apart, which is why he represents all the failure of hetero-patriarchy. I do pity those caught up in the entanglements and chains of the heteroarchy complex of homophobia and heterosexism. Great is the hate they must bear in order to validate their world.

If anything I am frustrated with the heteronormativity which allows those who set the stage for this tragedy through attitudes and words to claim innocents of their part in the terror. There is a great temptation among such people to say, "The shooter doesn't represent us!" The sobering truth is that the shooter does represent everyone who has ever made a snide remark, sneered, told a joke, posted anti-queer memes, or remained silent as others did these things.

My brother, who is ensnared in heteronormativity, stated, "No. He was an Islamist terrorist. No more no less." With this statement my brother does not have to hold himself accountable for the barbs, the shaming, the cold shoulder that exists between us. He is innocent for an "Islamist" killed and maimed. The heteroarchy complex is unstained and remains the untouched and unreflected upon abode of prejudice and hate.

Also caught up in the entanglements of heteronormativity are clergy and politicians who have been strident in their anti-queer rhetoric and activities. The most recent being their tantrum over bathroom use. If anything has raised anger in me today it has been the hypocrisy of these folks to raise up "prayers for Orlando."

I am sorry, but one cannot pray for Orlando if one speaks against homosexuality, seeks to pray the gay away, refers people to aversion therapy, opposes marriage equality, or otherwise uses one's office as a minster or civic leader to disparage the "gay lifestyle." The attitudes behind these actions set the stage for the tragedy in Orlando, as surely as striking a match sets a fire. The only prayer these folks can lift up is "God forgive us, for we know not what we do." Otherwise these clergy and politicians run the risk of becoming what Jesus describes as whitewashed tombs - pretty on the outside, harboring death and decay on the inside.

For those who went to enjoy a night out and a time to connect with like minded people,
For those who went in trepidation of exploring internal markers long denied,
For families suffering the news of lost loved ones and the lost chance to love their children fully,
God grant your merciful presence of love, comfort, and peace. Amen.
Posted by David K. Popham at 7:23 PM No comments: