If there is a model for us queer religious folk it is this Jesus: disrupting and creating, queering and inviting, acting up and "presencing" God's hope.

When Jesus entered the Temple, he drove out all those who were selling and buying there. He overturned the tables of the money-changers and the seats of those selling doves. He said to them, "Scriptures says, 'My house is to be called a house of prayer,' but you make it a den of thieves!"
Those who were blind or couldn't walk came to him in the Temple, and he healed them. When the (religious leaders) saw the wonderful things Jesus did, and heard the children shouting "Hosanna to the Heir to the House of David!" throughout the Temple area, they became indignant.
"Do you hear what the children are shouting?" they asked him.
"Yes," Jesus replied. "Have you never read, 'From the mouths of children and nursing babies, you have brought forth praise'?" After leaving them, he went out to Bethany to spend the night. 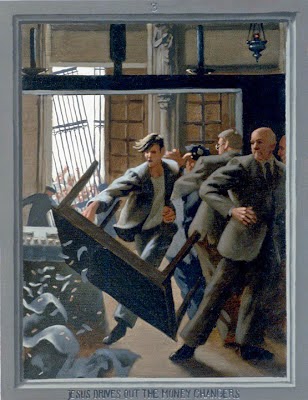 3. Jesus Drives Out the Money Changers (from The Passion of Christ: A Gay Vision)
Doug Blanchard

Queering is an intentional disruption to the normal perception of reality. To queer is to act up and unmask hypocrisy and injustice. To say that Jesus queers religion is to say that Jesus purposefully disrupts the unexamined hypocritical and unjust use of religion to subjugate marginalized populations as "sinners."

"Jesus acted up when he saw something wrong. Nothing made him angrier than religious hypocrisy blocking the way to God. He got mad when religious leaders made people pay to attend worship. He said, you can't buy your way to heaven! Everyone gets God for free... Hypocrites! You're like fancy tombs, pretty on the outside, but full of death on the inside." (The Passion of Christ: A Gay Vision text by Kittredge Cherry, art by Douglas Blanchard)

Jesus disrupts the oppression of religious systems. Notice in Blanchard's painting the gates being torn down due to Jesus acting up, freeing those held back by religious attitudes. In this protest Jesus liberates the people to claim their own relationship to God without the intervention of religious institutions.

Our text doesn't stop here though, and neither should we. Queering doesn't only disrupt, queering also creates. The text immediately moves us to Jesus other act of queering. Traditionally it's called "Teaching in the Temple," but that is not really what Jesus is doing here. It is more like he is "Creating Community in the Temple." Those who were marginalized by the institution, who were barred by the gates, are now welcomed into the fullness of God's love and being. Jesus creates community among those and for those who had been shunned under the old order of things. Those classified as sinners are the very ones Jesus welcomes. In the language of the gospels, Jesus makes present the coming kin-dom of God.

If there is a model for us queer religious folk it is this Jesus: disrupting and creating, queering and inviting, acting up and "presencing" God's hope.

A cautious word of warning. These two acts of queering are held by many biblical and historical scholars to be the events which trigger the plot to execute Jesus as a prisoner of the state. Civil religion takes a very sour view of those who would queer her and hold her accountable for her hypocrisy and injustice.

For all my wrestling, as a leader in a religious institution, I squirm uncomfortably at the feet of our queering Christ. Even though I serve in a very progressive expression of the faith, hypocrisy still sniffs at my heels. Which is why I need this acting up Jesus who queered and continues to queer religion until the gates I help build are torn down, those I seek to exclude are welcome, and God's kin-dom comes in its fullness.

Are we then doomed to live out our narrative in prescribed roles handed us by the larger culture, adding neither novelty or substantive essence to our own being?

About eight days after these words, He took along Peter, John, and James and went up on the mountain to pray. As He was praying, the appearance of His face changed, and His clothes became dazzling white. Suddenly, two men were talking with him - Moses and Elijah. They appeared in glory and were speaking of His (exodus), which He was about to accomplish in Jerusalem.
Peter and those with him were in deep sleep, and when the became fully awake, they saw (Jesus) glory and the two men who were standing with Him. As the two men were departing from Him, Peter said to Jesus, "Master, it's good for us to be here! Let us make three tabernacles: one for you, one for Moses, and one for Elijah" - no knowing what he said.
While he was saying this, a cloud appeared and overshadowed them. They became afraid as they entered the cloud. Then a voice came from the cloud saying:
This is My Son, the Chosen One;
listen to Him!
After the voice had spoken, only Jesus was found. They kept silent, and in those days told no one what they had seen. 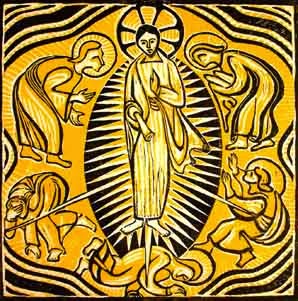 The Transfiguration of Our Lord

You and I really don't need the scriptures to tell us of transfiguration. We have seen it in our friends. Every time a queer person comes out, transfiguration occurs. Every time a bully is stood up to, every time we honor our loving, every time we celebrate and take comfort in who we are at the core of our being transfiguration occurs. Our journey to be transformed ever more into who the Sacred intends us to be is the journey of metamorphosis from the exterior to the interior. Jesus is transfigured into the Christ when he finally touches the truth of his being and embraces all that Christhood will ask of him. It is not a fleeting burst of wonder which Jesus experiences upon the mountain. Rather it is a confirmation, deep within himself, that as he authentically lives who he is, he becomes more and more a beloved child of God.

There is, of course, a tension here. To claim more solidly our identity as queer, and live out who we are, is to play into society's need to compartmentalize and pigeon-hole. Jay Emerson Johnson explains this catch-22 of Western society: "Living in modern Western society means being identified and to occupy a particular cultural space based on that identity. Coming out as L, G, B, or T does not disrupt that identity-placement system. To the contrary it reinforces it by performing a different script, one that comes ready-made with its own social place to occupy, usually that of an 'outcast' or a 'rebel' or a theological 'dissident,' but also more recently as a lucrative 'market niche' for corporate advertisers." (Peculiar Faith: Queer Theology for Christian Witness)

Johnson's insight reminds us that even the act of coming out - a holy and sacred act for all who self-identify as queer - in the end fails to transcend the larger chains of culture. We come out of one bondage and enter into scripts which bind us to norming expectations for our identity. This dynamic chains all - women, children, black, Muslim, Christian, even white heterosexual males. Are we then doomed to live out our narrative in prescribed roles handed us by the larger culture, adding neither novelty or substantive essence to our own being?

Looking at the transfiguration of Jesus we might offer, even if tentatively, a hopeful "no." Scripts for would-be christs abounded in the time of Jesus. The military hero, the political victor, the powerful figure who would subdue all detractors. So strong were these norming expectations that having failed to find at least one of these scripts in the actual life of Jesus, the writer of Revelation apparently pushed them onto a future, yet to come Christ (and we have been paying a theological price ever since).

What we witness on the mount with Peter, John, and Andrew is that in prayer and internal reflection, Jesus is drawn deeper and deeper into his being and his becoming. Moses and Elijah (both "scripts" from within the Jewish tradition) enter into conversation about Jesus' impending journey and what type of Christ he will be.

As Jesus experienced in his depths, transfiguration and metamorphosis have the power to cut us loose from the prescribed cultural scripts. Such cutting and losing occurs at the nexus where our pain and struggle to be conflicts with the cultural scripts which seek to bind us. Paradoxically, metamorphosis occurs in the midst of our duplicity and imperfection and in the knots of our lives where we become uncomfortable with, kick against, and disrupt the norming expectations handed us. Realizing that scripts play the role of "keeping us secure" within cultural expectations, to be transfigured is to enter our heartache born out of the fear which threatens to undo us when we are finally free of societies' scripts (if we can ever be truly free).

This is Peter's mistake. He wants to freeze the experience at a level too shallow before the core of being and becoming is touched - before Jesus can integrate into his identity that to be beloved and chosen does not save him from humiliation and death but ironically leads to it. On the mount, Jesus undergoes a death to himself and the cultural scripts he might find comfortable. Later he will ultimately bear this death in his wounded and lifeless body, as did Gandhi, as did Martin Luther King, Jr. To refuse the norming expectations of society and grow in the norming expectation of divine love will invite violent rejection from those clinging to the cultural scripts.

At some level Peter understands what transfiguration calls for and fears the loss of the scripts by which he understands Jesus. Later Peter will make another attempt to reject Jesus' chosen narrative. It reminds us that friends are all to willing to hand us scripts that help them remain comfortable. In the face of both friend and foe the Sacred calls us deeper to the internal struggle to choose and write our own narratives. As we accomplish this, we might, and certainly those around us will be, dazzled and dumbfounded.
Posted by David K. Popham at 9:00 AM No comments: